Alligator Farm Zoological Park is just a few minutes to our north on A1A.

The St. Augustine Alligator Farm Zoological Park began in the late nineteenth century as a small exhibition of Florida reptiles and soon became a quintessential Florida attraction. Today it functions as a modern zoo serving the public and the scientific community with educational shows and exhibits, important research, and worldwide conservation efforts. The Alligator Farm’s history as an attraction and an accredited zoo is nearly as exciting as zipping across the Alligator Lagoon on Crocodile Crossing, the park’s thrilling zip-line attraction. 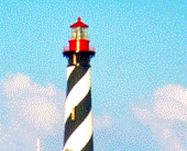 The St. Augustine Lighthouse & Maritime Museum is dedicated to discovering, preserving, presenting and keeping alive the story of the Nation’s Oldest Port. 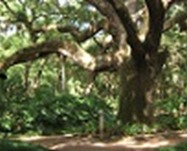 Washington Oaks State Park is about 15 minutes to our south on A1A.

Although the formal gardens are the centerpiece of this park, Washington Oaks is also famous for the unique shoreline of coquina rock formations that line its Atlantic beach. Nestled between the Atlantic Ocean and the Matanzas River, this property was once owned by a distant relative of President George Washington. The gardens were established by Louise and Owen Young who purchased the land in 1936 and built a winter retirement home. They named it Washington Oaks and, in 1965, donated most of the property to the State. The gardens make remarkable use of native and exotic species, from azaleas and camellias to the exquisite bird of paradise, sheltered within a picturesque oak hammock. Visitors can picnic and fish from either the beach or the seawall along the Matanzas River. A number of short trails provide opportunities for hiking and bicycling. Visitors can learn about the park’s natural and cultural resources in the visitor center.

Marineland is located just to the south of Fort Matanzas.

Marineland opened in June of 1938 as Marine Studios – a facility designed for Hollywood film makers to create underwater footage for their movies.  The founders, Douglas Burden, CV Whitney and Count Ilia Tolstoy could never have foreseen the excitement that this innovative “oceanarium” would create among the general public. Never before had people had the opportunity to see marine life live and up close, and from the day it opened, Marineland has provided that opportunity to millions of amazed guests.

Fort Matanzas is located just a few minutes to the south of CS.

Coastal Florida was a major field of conflict as European nations fought for control in the New World. As part of this struggle, Fort Matanzas guarded St. Augustine’s southern river approach. The colonial wars are over, but the monument is still protecting—not just the historic fort, but also the wild barrier island and the plants and animals who survive there amidst a sea of modern development.